MY BOOK OF THE DEAD Press Release

MY BOOK OF THE DEAD:  New Poems 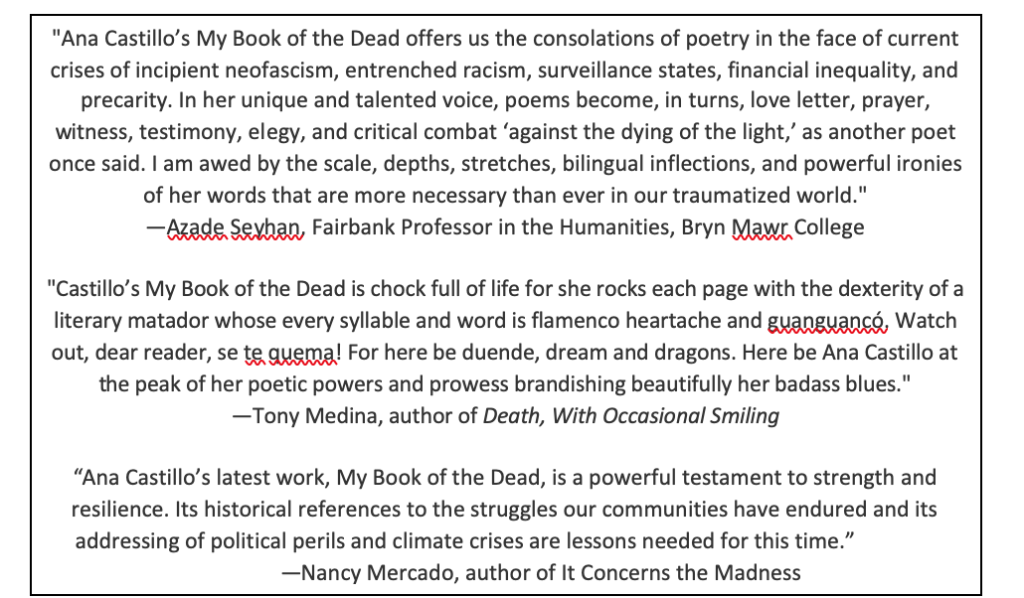 In MY BOOK OF THE DEAD: New Poems Ana Castillo, called “the most daring and experimental of Latino novelists,” surveys the America landscape – its killing fields littered with the debris of our excesses, ghosts haunting its dark contours – and speaks to us in verse, English and Spanish, of the destruction we’ve sown with selfishness, greed and animus for those we’ve othered.

Castillo is a scholar, a renegade, a survivor, a first generation American, a daughter of Mexican immigrants, an activist who came of age in Chicago in the 1960s. She is also a creative powerhouse and public intellectual renowned for pioneering feminist analysis in non-fiction and fiction. And while she is most recognized for her prose and essays, poetry has always been her first love.

And here she is, a poet at the height of her powers, looking back and looking forward in poems that are at once highly innovative and based on established oral and literary traditions. These are poems personal, historical, political and emotionally combustible.

A book of forty-eight deeply imaginative poems written in three parts, here on the page is our country in the Twenty-first century: the pandemic, the deaths, the lies, rampant inequality, unbridled consumption, mass shootings, boundless anxiety all on a warming planet.

There are several poems in Spanish with glorious translations into English (by the poet and with translators).  There are persona poems to break your heart:  the voice of a Bedouin woman whose beloved son, a writer, is in prison; a poem about death by gun called “Incomplete List” that catalogues race murders, suicides and school shootings – the locations, dates and people gone.  And other poems of remembrance, “Akilah and me, tokens . . . brown female evolved spirit/from the Southwest or southside of any city.”

There are poems about the predation of the Earth; a shut-down of the whole Federal Government; of motherhood, love, friendship and getting old.  Here’s musing on Art: “Today anyone may have instant fame./But the number of geniuses is the same/any given time./Maybe five.”

There’s a sly homage to Bukowski and Bolaño in a poem titled “Two men and Me” and a pastoral poem about Whitman.

MY BOOK OF THE DEAD paints a vivid panorama, a contemporary Hieronymus Bosch triptych in breathtaking magnificence because of Castillo’s skill, her ear, her vision, and her courage.  Infused with passion, lyricism, and magical realism, Castillo makes us laugh and cry and speaks truth we need to hear. 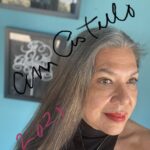 Ana Castillo is a celebrated author of poetry, fiction, nonfiction, and drama. Among her award winning books are So Far from God: A Novel; The Mixquiahuala Letters; Black Dove: Mamá, Mi’jo, and Me; The Guardians: A Novel; Peel My Love Like an Onion: A Novel; Sapogonia; and Massacre of the Dreamers: Essays on Xicanisma. Born and raised in Chicago, Castillo resides in southern New Mexico.

MY BOOK OF THE DEAD: New Poems by Ana Castillo