My Book of the Dead: “An Homage to Akilah” 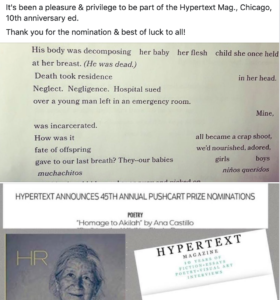 “An Homage to Akilah” a poem en memoriam of the poet, Akilah Oliver and her son, Olushi recently nominated for a Pushcart Prize.

In 2017, “Two Men and Me,” another poem in the collection published in Fifth Wednesday Journal also received a Pushcart Prize nomination.

The collection’s poems were written between 2012-2019, many have gone through numerous revisions.  I put them away sometimes for years.  When do I know if a poem is done?  It’s hard to say.