So   many years ago I added this book to my library. 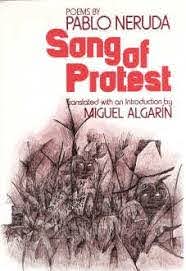 Neruda was introduced to me by a good friend then, when I told her I had aspirations to become a poet. I don’t know how this title came into my possession but I still have it and consider it an important tool in my own development as a poet and translator.

A few years later, I came to know Miguel Algarín, whom I first met when he was invited by a university to Chicago.  Later, we would see each other many times, mostly but not limited to the Nuyorican Poet’s Cafe in the Lower East Side. By then, I had entered the poet’s life with two chapbooks and a new book.

His contributions to the cultural life of POC, not limited to those in NYC were extensive.

I’ll save my best memories of him for a later time. Suffice to say here, in memory of his departure, that we read together publicly and privately on many occasions over the decades.  We danced, drank and mused privately and publicly.  I’d be remiss and disingenuous if I didn’t add that he occasionally got on my last nerve both publicly and privately. But he was one of a kind, a self-made man in a world where men  and women of our background were and are often held back because of it, despite all our efforts to break through glass ceilings, adobe walls, barbed wire fences and all manner of stop signs held up after 500 years of colonization.  We in the Americas are descendants of slaves and indentured servitude.  The Nuyorican Poets’ Cafe became a symbol of the songs and cries of lyrical descendants.

Those of us who read there in the 70s, 80s, and 90s–are grateful for the space but hold a lifetime of gratitude to Algarín and those who held it down.

In 2020 we, those same ones, often encounter new people on the planet who think that by creating a foundation based on criticism of their foremothers, forefathers formed out of the perspective of their current privilege, know the whats,why, hows, when and wheres of a time when to be a Puerto Rican or Chicano/a poet was to accept the fact that no one else was open to hear our songs, plays, verses, stories but other people of color, like ourselves.  And in that time, back in those days as it were–it was enough.  “I hear you,” the audience at the Cafe seemed to say while listening intently, critically, silent as a private prayer as you stood on stage under harsh lighting, under the harshest scrutiny–the scrutiny of your peers– that you’d ever have. I hear you and I welcome you.  I know who you are.  I know your story because it is my story, all our story.

, Prof. Algarín from my heart.  My condolences to all who feel the loss.