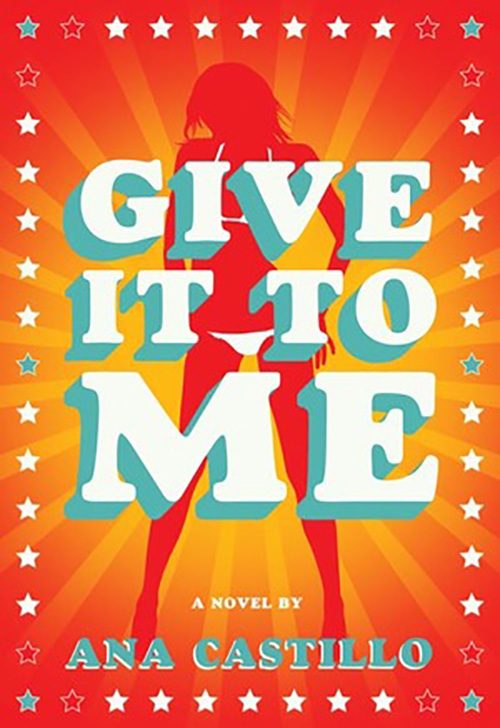 Palma Piedras is forty-two, just divorced, and back in the U.S. after several years in Colombia, where her now ex-husband had tried to make her into a traditional South American wife while he plied the family (drug) trade. The grandmother who raised her while the parents she can’t remember picked produce in Southern California is dead (not that her being alive would have made much of a difference, since their relationship was at best irascible). Palma’s got no relatives she knows of other than her deadbeat uncle, who’s letting Abuela’s house rot around him, and her charismatic, problematic cousin Pepito, who’s just finished ten years in prison, and with whom she shares a problematic sexual tension. This is the fraught beginning of Give it to Me, the latest novel by Ana Castillo, the doyenne of Chicana writers.  —CLICK HERE

A writer’s relationship with solitude is paradoxical. Alone time is necessary for completing work, yet if writing is done correctly, it can create a sense of global community that inspires solidarity. If done well, an otherwise insular experience relayed through a story can make the personal and intimate something universal and poignant, something that speaks to the human condition with authority and grace…  It’s a gift when we find books like these. They are treasures where we can find our hardest experiences laid bare in front of us, as if to say, drink deeply and feel assured. Such is the case with Ana Castillo’s book Give It to Me. A gritty, yet humorous, book with unflinchingly honest characters..

“…a fun, insightful, sometimes raunchy read that will be welcome by Castillo’s many fans.”
–Booklist

“Castillo has established a solid reputation as one of the most powerful writers giving voice to the contemporary Chicana experience. Palma lives up to the Castillo’s reputation of creating strong characters that defy stereotypes” –Starred review, Library Journal

“In this gritty and entertaining novel, Ana Castillo paints a captivating portrait of a future that defies odds questions stereotypes and always maintains a sense of humor.” –Elena Poniatowska, author of Hasta no verte, Jesús mío.

“With its daring eroticism, this novel make a bold statement about feminism and women of color.”–Buzzfeed.com (Fourteen Must-Read Works of Chicano Literature)

–Give It To Me gives us a post 9/11, post-Bush, fast-talking, fast-walking multicultural, multiracial, multisexual panoply of characters…I thought I would die laughing.”–Cheryl Clark, author of The Days of Good Looks: Prose and Poetry 1980-2005

“From the moment I read Women are not Roses by Ana Castillo in 1984 I knew she was a writer who would always reach inside her readers and squeeze until we were breathless. Years later Castillo has not let go. In her new novel, Give It To Me, Castillo delivers a story that is both tawdry and transcendent. Her main character, Palma Piedras, is a survivor whether facing an icy grandmother, a domineering suitor or sexy con artist. She careens from Chicago to Albuquerque to Los Angeles, and from bed to bed, barely able to keep up with her own appetites. The sense of contemporary rootlessness chafes against deeply rooted Mexican-American culture creating a raw friction unlike any other story out there.”
—Jewelle Gomez, The Gilda Stories

In Ana Castillo’s edgy new novel Give It to Me, no-holds barred Palma Piedras…crash lands on everybody’s heart. Palma’s escapades–erotic, sexy, comic and, by the end, devastating and poignant… An evocative page-turner.–Rigoberto González, author of The Mariposa Club

Cheeky, amoral, and a gritty survivor, Palma Piedras, the main character of Ana Castillo’s GIVE IT TO ME, is a picaresque heroine for the 21st century. The barbed sense of humor on display here is a welcome tonic. GIVE IT TO ME demolishes clichés and tired tropes, as Castillo depicts, with an unflinching satirical touch, a vivid cast of rogues and helpless characters who alarmingly resemble people we know.–Jaime Manrique, author of Our Lives are the Rivers