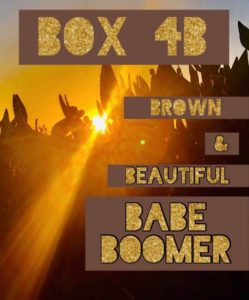 During a world pandemic we all feel vulnerable.  Our livelihoods may be at risk.  Family & friends, out of reach.  Older individuals and people with compromised immune systems feel the stress of potential contracting.  Nevertheless and maybe because of all this, let’s not forget we remain relevant, appreciated and even admired– for all good deeds and smiles–if only at this time at a distance. Thank you to the contributors whose images and words we hope you enjoy in this second issue of La Tolteca 2.0.

Mullally at home & about in the Bay Area 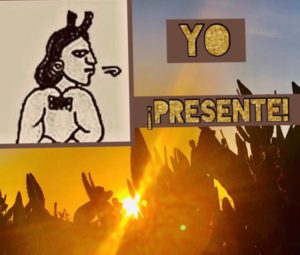 Children’s Books and Art at the Border 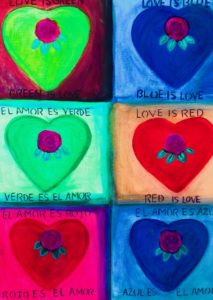 Children’s Books and Art at the BorderValerie AndriolaIn December of 2017, thousands of Central America and Mexican refugees arrived in Caravans to Tijuana and other Mexican border cities, creating an unprecedented humanitarian crisis. Families were fleeing violence from their home countries, seeking asylum in the United States of America. When they were not allowed entrance to the United States, they became trapped in the border cities without adequate support from anyone. Migrant centers were hastily set up, and within a few months, food, clothing and shelter seemed well established with different humanitarian and faith groups on both sides of the border. One of the next questions that arose was what would be done for the thousands of children without access to school?
Children can express their feelings better with pictures than with words. They can communicate Something that longs to be shared can be communicated without words, by creating a painting. When shared in an expressive and visual way, the child’s inner life becomes less lonely. Like the picture book, the act of drawing and painting helps them understand and make sense of their environment. By talking about their creative work, they begin to open up a dialogue about their feelings and their experience.

The refugee children that I have worked with are proud of their creations and their ability to share their experiences with the other children in powerful ways that would be limited by words alone. Drawing and painting are beginnings of important conversations. When art work is shared, important validation is received and this encourages further creative expression. Books and art have a much needed positive and therapeutic effect especially on children whose lives have been interrupted by trauma. 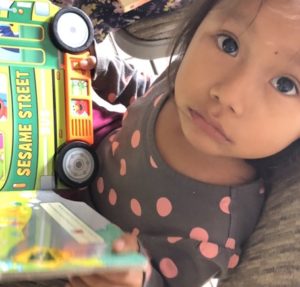 We do not know all that they may have experienced, but we do know that they and their families are running to save their lives. They need to be shown, by our acts of kindness, that there are adults of integrity and humanity on both sides of the border. To deny a child of the basic human necessities of food, clothing, and shelter, or the basics of a universal education in the form of books, pencils, paper, and paint, is to deny them their basic human rights—a crime against humanity. By providing humanitarian aid and addressing an important component of their educational needs, we are responding to our fellow humans with acts of social justice that begin to heal the horrendous suffering inflicted on these families in their home countries and on our borders. The migrant or refugee story is one that should not go untold. An important part of the human condition, it is the universal story of the human exodus fleeing oppression and injustice.

“The madonna is mixed media–a high contrast digital photo repeated and enhanced with acrylics  I tried to get different skin tone colors because a black madonna exists.”

Artist Statement:
My life is a work in progress. It is about having the soul of an artist in the body of an ordinary woman. I wanted life on my own terms–my own way to exist in the world.  I refused to be defined by others. I needed content and meaning in my life. It was a lonely path.
When I entered Kindergarten in Brooklyn, New York where I was born, I knew no English–being the first-born of immigrants from Sicily, who met and married in Brooklyn. My teacher, seeing that I never spoke, thought me deaf and dumb and called my parents. “She can speak,” said my father, “she just does not understand English. She speaks plenty at home.” So my teacher in all her wisdom,  put me on the easel to paint all day. I found I could say more with color and shape than I could with words.       That year, I won a medal for my painting in the annual exhibition of Children’s Art sponsored by the Public Schools of the City of New York. From then on, I knew what my life path was to be–flor y canto. As the Nahualt poet said, “Will nothing remain of my life here on Earth? At least flowers. At least song.” ~Grace Purpura

And the people were told to stay home and isolate.

When days turned to months,

The lonely took to the streets,

They shaped a multilingual future,

Chose love and sacrifice over comfort and security.

You don’t know that I am Black,

That I am your daughter.

All you see is a smile in a red dress,

Someone who breathes, takes your space.

You know the hidden story.

You don’t have to pay 23andMe to see

There’s more than hair color that binds us.

While nine minutes can make a baby,

The slow tick-tock can break a man.

My mother’s hands replace me.

The right mess tries to pick up a cup,

settles for a pencil, the left hand helps.

She scribbles a list, a secret only she can read.

Her children are finger puppets with no names.

Who needs names when only the left child behaves.

Curled brown knots on her lap.

You are the only two left.

Soon, you will turn into birds and leave.

She sighs, holds back toughened tears.

Her eyes fail to meet me, her middle child.

After the massacre the barrio listened.  They loved each other more. Held the hearts of the

injured. Made fresh tortillas and stirred the beans.

“Why?” an old mexicano with a face as wrinkled as history asks. “He didn’t even know

A five year old’s first day of school includes an active shooter lockdown drill. After school he tells his mother: “I won’t be going back.”

“They shoot kids there,” he tells her.

She does not slouch as she lights another cigarette . She sits up straight and watches a  young white nationalist slaughter Mexicans. They fall, men, women and children with terror in their eyes .  So much blood on the tiled floor.

“What is a nationalist” she says aloud “what gives him permission to kill us?”

They hang out at the bridge or along the river. Reach out for those who stumble across . Give a hand to swimmers in the Rio Grande who cannot swim but paddle their way to America.  O! America your ghosts outnumber the living.

Our ancestors  return in the blood of those walking another trail of tears. Rivers were once our roads.

The waters remember everything. 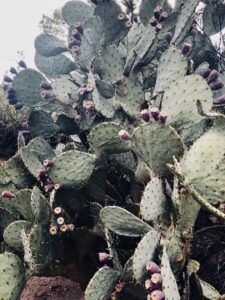 aunque yo no soy 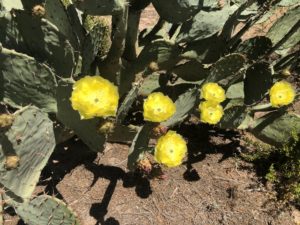 Dear Readers:  La Tolteca is back blogging La Tolteca 2.0 approximately twice a month.  All submissions must follow guidelines to be considered. 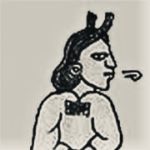 LA TOLTECA 2.0 is making its return here at www.anacastillo.net  It is a virtual zine with ongoing posts. You may submit to ana@anacastillo.netYoul’ll receive an automated response and nothing further.  (If you don’t receive the automated response alert me on FB messenger) For consideration to the following new features only unpublished, never posted on SM, original images and material.  If your work is selected it will be posted the following Friday.  If not, you won’t hear from us but you may try again with something new.

You don’t have to be brown or a Boomer and your submissions don’t have to be selfies but you’re welcome to submit.  Send us what gave you a smile, lifted your spirits, kept you going that past week.  Smart phone pics work, no  specific format necessary.  Do NOT send images previously posted on social media or elsewhere.  Your submission is consent for use at L/T 2.0.  Add a couple of lines with your name and about the pic or yourself to be included, if selected.  If any of your submission is selected it will be posted the following Friday.  If not, you won’t hear from us but you will be welcome to send something new for consideration again.

No rants or editorials, please.  Only clean, proof-read submissions in a journalistic style will be read for consideration.  Double space, 12 point, Times Roman—750 words.  Your most recent activist concern.  Include your name and a line describing how you participate in social justice issues.  Checklist for your piece:  What, when, why  who and how.

All submissions must have been proofread double-spaced, 12 point, paginated.  Fiction word count limit 2,500.  Your name and one line about yourself or your submission.  If selected, it will appear the following Friday on Tolteca 2.0, anacastillo.net homepage.  No emails will be sent out.  If you don’t hear back it wasn’t selected.  You are welcome to send something else next time.

La Tolteca 2.0 is a blog.  We reserve all rights to post as and what we choose.

If your original works appear here you may use again elsewhere with credit to first appearing at La Tolteca 2.0 (and date.)

Beautiful issue. Especially appreciate seeing Grace Purpura’s work, which I had not know before. Felicidades a Ana y all the contributors.

I want to tell you how impressed I am with your magazine La Tolteca 2.0–los que “sabian diagolar con su propio corazón.” The pages are lush with the use of much color and I love the clean layout. It is refreshing, with plenty of open space that set off beautifully the great art, illustrations, and poignant articles and poems, giving voice to the voiceless–all done with much good taste. Thank you for this handsome new issue. It is food for the spirit– especially needed in these trying times of Covid-19. Thank you also for your fine coverage of my work.
Much success.
Grace Purpura

Thank you, Grace Purpura. Your contribution to this last issue was a jewel. We here at La Tolteca headquarters also wish you, Valerie & all much luck & success with all you have in front of you these days.