Advanced Praise for MY BOOK OF THE DEAD Sept. 1

Imagine Frida Kahlo playing timbales, Georgia O’Keefe making syllables open and flutter like flowers. Lorca sin bullet holes come back to us as Lavoe with a trucutu trucutu trucutu for you. If that’s not enough how about Ana Castillo’s poems burning up each page as stage si fuera manteca! For in My Book of the Dead you do not delve in the sweet hereafter as if in a level of Dante’s Hell, but in the mystical, 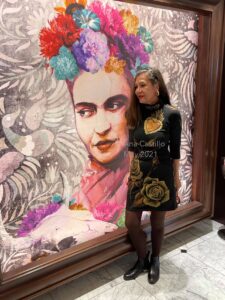 magical realism breathing life into the quiescence of the everlasting moment of the hear and now caught up in the impossible duende of a poet whose every palabra celebrates and embraces la vida. The Egyptians may have had Osiris but we have Ana Castillo and her honey for Oshun. Don’t get it twisted, Castillo’s My Book of the Dead is chock full of life for she rocks each page with the dexterity of a literary matador whose every syllable and word is flamenco heartache and guanguancó. Watch out, dear reader, se te quema! For here be duende, dream and dragons. Here be Ana Castillo at the peak of her poetic powers and prowess brandishing beautifully her badass blues 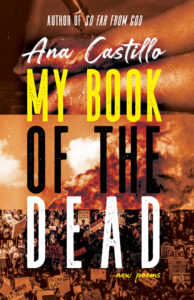 Ana Castillo’s My Book of the Dead offers us the consolations of poetry in the face of current crises of incipient neofascism, entrenched racism, surveillance states, financial inequality, and precarity. In her unique and talented voice, poems become, in turns, love letter, prayer, witness, testimony, elegy, and critical combat ‘against the dying of the light,’ as another poet once said. I am awed by the scale, depths, stretches, bilingual inflections, and powerful ironies of her words that are more necessary than ever in our traumatized world.

–Azade Seyhan, Fairbank Professor in the Humanities Emerita and Research Professor, among book credits:  Writing Outside the Nation (Princeton)

My week was made this past week receiving these endorsements for the new collection from two accomplished thinkers and writers.   My acquaintance with Dr. Azade Seyhan, originally from Istanbul was with her study on Turkish women in Germany in which she made a comparison to Chicanas in the U.S.  She continued her academic career and scholarship in the U.S. and internationally for many years after.  It’s been an honor to have drawn the respect and interest of a forerunner of such research.

Tony Medina, who has taught as a writing professor at Howard University, served his country in the military and is a prolific writer and anthologists does me the honor to endorse this new collection.  Poet Tony Medina proves through his work and many hats how we may stay faithful to our core principles as POC.  Activism, in my view, is at its best when it unifies us. I am grateful to him for the read of MY BOOK OF THE DEAD.   Not since Oscar Hijuelos, has someone noted the influence of mambo in my poetry–not just music that I listen to but that I’ve inherited through my musician father.  My father paid the bills by working in a factory in Chicago but he was a percussionist and all things Latin, Afro-Latin, Caribbean and Brazilians rhythms have played deep in my head and heart.  Growing up in Chicago, my experiences with renown musicians have remained indelible and I am certain their sounds infiltrated my poems. 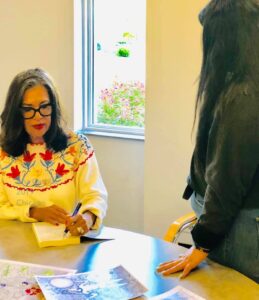 To paraphrase Antonin Artaud, the world keeps getting populated by strangers.  Each generation is further distanced from the realities and circumstances set before people decades before.  In many ways, society changes very slowly.  What hasn’t been changing slowly but with frequencies and fraught with controversy are identity politics.  Currently, there are ‘gatekeepers’ who focus their mental energies on discrediting the assertions of the previous generation. Nothing is simply black and white.  I am of the conviction, however, that there is no controversy in the fact of White Supremacist, imperialist, patriarchal holders of power.  They have reared their ugly heads in today’s GOP.  They are actively pushing laws that will deprive most people of basic rights.   It’s clear to me where my energy goes everyday.  It isn’t to the previous generation that ‘let this happen.’  It isn’t to the Millennials who showed the first signs of both admiring the preceding activists, academics and creative thinkers and questioning their actions and motives.  It isn’t the the current generation which includes countless of courageous activists as well as the gatekeepers, who, in my thinking, show much more personal insecurity than actual analysis of how to move forward with their perspectives.  Just as they learn from their parents, grandparents, tíos how to survive, whether how to cook an egg without burning down the house, for example.  They may look at our ‘teachings’ as coming from the same good intentions.  Please don’t burn down the whole house while you are trying to fry an egg to satisfy your hunger.  To extend the metaphor, don’t carelessly burn down the house that while it may be old and in need of repair, filled with useless stuff, it has provided you with shelter.   Work and buy the lot next door, build a new house, invite in your elders who now need your care.

Decade after decade, I continue to work at my own views–as a continuum, of the previous administrations of this country and elsewhere, effects of climate change, women’s rights and the ongoing battle against the violation of human and animal rights throughout the world.

In 2015, on a solitary night in my homestead in New Mexico I learned of the death of poet-activist John Trudell.  Some years my senior he had proceeded my own awareness of indigenous struggles.  As an AIM leader he suffered the greatest of losses.  He warned us all of what could come if we didn’t all turn things around.  In homage to this activist, I penned the poem, ‘A Storm Upon Us.’  It led the way for the tone of MY BOOK OF THE DEAD, a new collection I was already working on in 2015–albeit ever slowly.  Poems and a poetry collection take a long time for me. I feel confident about the poems I’ve included. ( They didn’t all make the cut.) During 2012 and 2020 much occurred in the world.  As a poet, much resonated with me in my heart but also in my daily life.

I hope these poems resonate with you, also, and in some way, bring you the comfort Azade Seyhan in the quote above asserts.